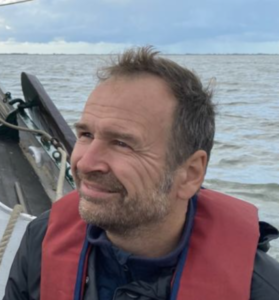 This episode is sponsored by Spatial, the immersive audio software that gives a new dimension to sound. Spatial gives creators the tools to create interactive soundscapes using our powerful 3D authoring tool, Spatial Studio. Their software modernises traditional channel-based audio; by rethinking how we hear and feel immersive experiences, anywhere. To find more go to https://www.spatialinc.com.

In this episode of the Immersive Audio Podcast, Oliver Kadel and Monica Bolles are joined by the co-founder at Audio Ease – Arjen Van Der Schoot from Utrecht, Netherlands.

Arjen studied music technology at the Utrecht School of Arts. After which Arjen and 4 of his fellow graduates started Audio Ease in 1995. He was freelancing recording Classical music, Minoring in Classical guitar and majoring in software development for audio and music. Together they made about 10 products before their big break with Altiverb which became an industry standard. The 360pan suite came out of the fierce hope that an old affection – ambisonics, would now finally definitely make it, because somebody thought of it in the context of head-tracked VR, an application that requires headphones, in Arjen’s opinion the only medium it is perfect for.

Arjen tells a fascinating story of the creation of Audio Ease and the famous Altiverb and we explore the topic of convolution for spatial audio.

We want to hear from you! We really value our community and would appreciate it if you would take our very quick survey and help us make the Immersive Audio Podcast even better: surveymonkey.co.uk/r/3Y9B2MJ Thank you!

This episode was produced by Oliver Kadel and Emma Rees and included music by Rhythm Scott.